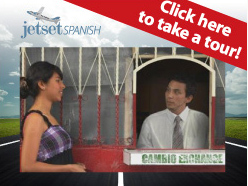 Jetset Spanish is a new Spanish course from the makers of the highly regarded Rocket Spanish that aims to take the fear out of speaking Spanish through a series of friendly, interactive downloadable lessons. The idea is that, by interacting in real-life video simulations, the student can gain ability and confidence before taking the next step of speaking Spanish with real people.

Also, video lessons are generally more fun than sitting down with a grammar book and sweating through page after page of exercises.

I recently had the opportunity to review Jetset Spanish to see if it is something I would recommend to my students. What I found is that the course is pretty much as advertised: a well-thought-out series of video lessons that delivers on the promise to ease the student into Spanish.

Mauricio at Rocket Languages says that the course was designed to give students more conversational practice than other courses on the market, and to motivate the student to continue in their studies. Both are worthwhile goals.

While I feel that no computer-based lesson can replace a good tutor, I agree that the video format of Jetset Spanish does introduce students to Spanish conversation in an easy, non-intimidating way. So this is probably great for shy students that don’t like making errors in front of a teacher or other students. And of course the cost of studying with Jetset Spanish is a fraction of what you would pay for a Spanish tutor.

In short, I feel Jetset Spanish is a great course for beginner students who want an easy, non-intimidating way to start getting in the flow of basic Spanish conversation, at home, and at their own pace.

Jetset Spanish: What to Expect

After puchasing the Jetset Spanish you get access to 15 interactive video lessons which you can download to your computer. All lessons are based on real-life situations such as shopping, asking for directions or exchanging money.

It works on PC or Mac. Plus a backup copy of the entire course will be shipped to you free of charge.

This Mac-friendly Spanish software works on both PC and Mac.

The company offers a 60 day, 100% guarantee. If you aren’t satisfied for any reason, you will get a full refund.

• Good choice for beginners who may be too shy to speak in front of other students or their tutor.

• Based on practical, real-life situations.

• Cost is about one-third the price of Rosetta Stone.