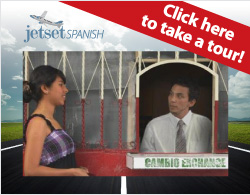 Today I received an email from Mauricio at Rocket Languages letting me know about a new Spanish course they will soon be launching. The course is called Jetset Spanish.

Jetset Spanish has been designed to take a lot of the fear out speaking Spanish when you still are learning the language and aren’t confident in your abilities. The course does this by letting you interact with people in a video. The goal is to let you practice and improve your Spanish without fear of embarrassment. It seems pretty clever!

Here’s how Mauricio explains it:

“Learning Spanish can also be a lonely experience if you don’t have anyone to practice speaking with.   Wouldn’t it be great if you could practice with native Spanish speakers anytime you wanted – without the fear of making a mistake?   Imagine if you could actually sit down at a restaurant with them, share a meal, and join in the conversation without the fear of failure. Picture having your own Spanish-speaking friends to show you how to get around town, book accommodation, and go shopping – in Spanish!   What if you could meet their friends and family, get the lowdown on how to party Spanish-style, and join them on a trip to the country?

“  That would be a pretty cool way to learn to speak Spanish right?”

I agree. Here’s a link to the Jetset Spanish sneak preview. Or watch the preview video below.