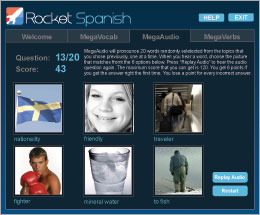 I received some additional information on the new Rocket Record pronunciation tool from Mauricio at Rocket Languages. Rocket Record will be part of the Rocket Spanish Premium Plus course as of June 21st. Here’s what Mauricio has to say:

Last time we spoke I told you about the brand new Rocket Record,
the latest feature of Rocket Spanish Premium Plus, that lets you
record and refine your pronunciation!

Today we’re going to have another look at just what Rocket Record
does.

Do you want to improve your Spanish accent, rhythm, and
comprehension? Then the answer is Rocket Record!

Rocket Record is the newest upgrade to Rocket Spanish Premium Plus,
that makes it easier than ever to get the sound of your Spanish
language absolutely perfect. By listening to the way the Spanish
host says the words, and looking at the wave-form produced by
Rocket Spanish’s amazing voice mapping interface, you get a clear
picture of the way the words are supposed to pronounced.

Then you get to record yourself saying the word, and watch the
shape of the wave form that you make. Match up your wave-form with
the one produced by the host and you’re there. Perfect
pronunciation!