Home » Blog » Hardest Word to Pronounce in the Spanish Language

Hardest Word to Pronounce in the Spanish Language 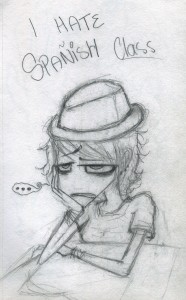 I’ve been speaking Spanish for years and have no trouble pronouncing 99.9% of Spanish words. I know I speak the language pretty well because native speakers have no trouble understanding me and I can communicate what I want to communicate. There is, however, one word that I’ve never even come close to mastering. In fact, when I say it, most people don’t know what the heck I’m talking about. Or, worse, they think I don’t really know how to speak Spanish.

The word I’m talking about is “raro”.

“Raro” means “strange” or “weird” and is commonly used, especially in Mexico.

In English, we might say “Wow, that’s weird” or “How strange”. In Mexico, they would say “Qué raro”.

Now the point of this post isn’t to highlight my Spanish deficiencies but rather to point out a useful technique that many advanced non-native speakers employ. The technique is word substitution.

Instead of beating myself up for not being able to properly pronounce one little Spanish word, I simply make a word substitution. In place of “raro” I say “extraño” or “inusual”, depending on the situation. Sure, it’s not perfect, but it’s close enough.

So next time you encounter a Spanish word you can’t pronounce, find a substitute word and move on. Life is too short to worry over a little word like “raro”.