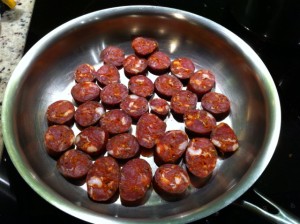 Spanish One Slice At A Time – image courtesy amorecucina.com.au

Learning Spanish language, like learning anything new, takes time and effort, so anything that makes the learning task easier and more enjoyable has to be a good thing.  I am always on the lookout for new ideas to help my students learn Spanish quickly and efficiently, so today I want to introduce you to a nice little open source software program and explain a bit about the concepts behind it and why it is so perfect for helping you learn a new language.

Much of our learning early in life is directed toward passing tests and we mount a huge effort to study and cram to remember enough to pass at test time. But then, as more time passes how much of what we once learned actually sticks as new memories replace old ones?

But you already know how it works.  Your manager thinks it’s a great idea so YOU get sent on some course that usually starts off, “at the conclusion of this course you will be able to recite blah, blah, blah”.  If you’re anything like me then going through the course content once is never going to be enough.  I need to rinse and repeat, and often. It won’t happen overnight, but it will happen!

Now don’t get me wrong, I love to learn new things and I pride myself on having a good memory.  I can memorise phone numbers, passwords, credit card numbers, faces, facts and figures, but I have a notoriously bad short term memory.  Ask me what I had for breakfast and chances are I won’t be able to tell you!  Lucky for me these days I have porridge every morning so by sheer repetition I can actually tell you about my breakfast with great (but possibly boring) confidence.

Put simply, repeating new information over time makes it stick around in your memory, and the best time to review and refresh that new information is just before you’re about to forget it.  You’d be forgiven for thinking that this is some modern, space-age development, but the effect of Spaced Repetition was first noticed by a German psychologist in 1885!

Actually, there are two elements to this – one is Spaced Repetition and the other is “Active Recall Testing” which is just a fancy way of saying that you test yourself by trying to remember the answers to a series of questions about your subject matter. It’s active in the sense that you *try* to remember, as opposed to passive learning where we read, watch or listen to stuff without stopping to check if we actually know the answer.

So, the way to absorb information is regular, paced exposure over a period of time — that’s how it gets transferred from short term memory into your long term, permanent memory. But how? Remember flash cards? The kind used to teach kids about the alphabet or numbers?  You can make flash cards by hand to help practice your Spanish but now there’s an even easier way.

Anki is open source software that runs on Windows/Mac/Linux/iPhone-Android devices that enables you to do just that.  It is described as friendly, intelligent flash cards that makes remembering things much easier – and it’s free!  You can create resources to support your learning goals for any subject matter or there are decks made by others and shared so you can import them into the program for your own use.  Some of my beginning students have used one called Spanish 400 – each card has a picture and the corresponding spanish word and Anki works out how often you need to repeat the word and picture association until you know the Spanish word by heart.

So there you have it. Who knew remembering stuff could be so easy?

Until next time Amigos!